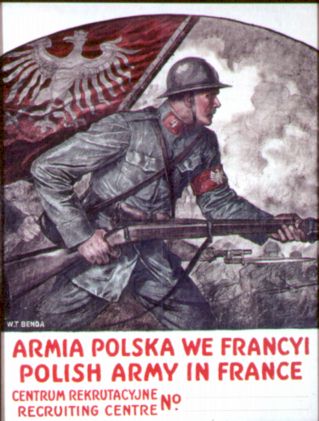 Description of the Army

About the Records Index

Returning Soldiers
Recruitment poster for the Polish Army in France by the graphic artist, W. Benda. Image used with permission of the Polish Museum of America, Jan Lorys, Curator.

Description of the Army

An estimated 20,000 Polish persons answered the call to fight for freedom and the opportunity to regain Poland’s independence during World War I in the Polish Army in France (in Polish, Armia Polska we Francyi). They were recruited from among the Polish immigrants who came to America to fight with France.

The Polish Army in France was also called “Haller’s Army,” after the general who commanded it, or the “Blue Army,” for the blue uniforms the soldiers wore.

Searchers, the Newsletter of the PGS of Western New York, #8, January 1993, pp. 17-20. “Buffalonians in Polish Army,” compiled by Ted Smardz, a listing of Buffalo recruits.

About the Records Index

The city and state give the place the person was from when volunteering. This is helpful to narrow the choices if the person of interest has a common name. The last column is labeled “Form” but serves as a location code. It describes which record group the information will be found in.

There are three groups:

Form A is an intention to volunteer and contains the name, address, age, and marital status. See an English translation of a blank Form A.
Form B is a medical examination report for the volunteer.
Form C is the final commitment paper and the most genealogically significant for researchers. Form C includes date and place of birth and usually the name and address of a parent or other close relative. See an English translation of a blank Form C.
The forms are typically carbon paper copies of the original and in some cases do not provide a quality photocopy.

The following ship manifests provide listings of returning Haller’s Army soldiers to the US in the 1920s.